I got my private pilots certificate in the fall of 2008 in the spring of the year I got married. I was going to Arizona State with ambitions to become a commercial pilot. By the time I got my private license the financial recession that happened that year in the next few years after was starting to manifest itself. I continued flight training seeing all my instructors leave for the airlines and then less than a year later come back to CFIs. By the end of the spring of 2009 I had changed my major to aviation management degree and decided to pursue aviation using part 61 I saw that I needed to pinch every penny that I could I still had ambitions to become an airline pilot but could see that I’d have to make every dollar last. I taken out a good number of loans in order to pursuemy aviation career. By fall of 2009 I was finishing up my commercial hours as well as working on my instrument rating. At the end of the year I applied for more loans in order to finish up my training. By then I was over 250 hours and had probably 30 hours of instrument training under my belt. But I was rejected no banks were handing out any student loans that I could find because of the recession. I had to throw in the towel not because I wouldn’t have finished just on loans but I was a new husband and a new father and at the time even if I did have all the certificates that I needed and was lucky enough to get a regional job the regional guys at that time weren’t making much more than 20 grand a year I definitely didn’t want to support a family on that. So I had a decision to make I could either finish my commercial rating or finish my instrument rating I wouldn’t have enough money to do both I had taken the written for both already.

I found a flight school up by Lake Havasu that did commercial land and sea ratings. Since I wasn’t going to go any further in my aviation career I decided to have some fun on my way out and get my seaplane rating at the same time. So that’s what I did I got my seaplane rating in January 2010 and was a commercial pilot without an instrument rating for almost 10 years. I continued to go to college through 2010 the whole time talking to a Navy recruiter when 2011 rolled around I didn’t go to that semester and entered the Navy in April 2011. The Navy benefited my family and myself more than I’ll ever know and I served four years getting out in April 2015.

Shortly after getting out I found a law-enforcement career and a few years in I was able to pursue flying once again. So I started studying for my written test again and once I passed in May of 2019 I went looking for a flight school. I had over 30 hours of instrument training from 10 years ago and needed the long IFR cross country. I had some G.I. Bill benefits that I wanted to use from the Navy but finding a flight school where I wasn’t a primary student and wanted to just finish up my IFR training using my benifits and take Uncle Sam’s money was like twisting peoples arm. I finally found a flight school a few hours from my house in Scottsdale. It wasn’t my first choice because they were a little pricey and far away but the training was superb and they helped me finish up.

So now I did it I’m finally an instrument rated pilot it’s kind of crazy to think about having gone 10 years being that exception to the rule a commercial pilot without an instrument rating having a limitation on my license saying I can’t fly passengers over 50 miles. It took a few weeks to sink in that I now meet all the qualifications for those job applications that say you need to have an instrument rating and a commercial rating pretty crazy. And that’s my IFR story. 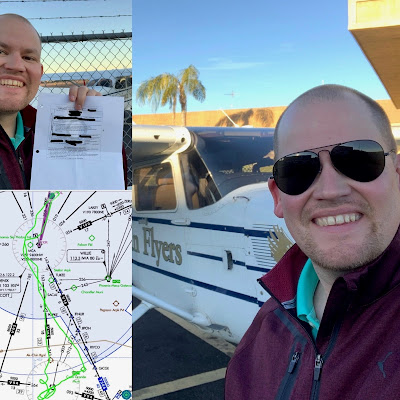 Unknown said…
Have you gotten your financial freedom yet? if not get intouch with mr pedro loans offer at 3% rate in return, Mr pedro granted me a loan when my bank couldn't granted my loan when my business was going down due to financial crisis on covid-19 then I begin searching online that how I came across Pedro loan offer which I applied and to my surprise My loan was granted successfully.
Contact pedroloanss@gmail.com for business loans,personal loans,car loans,home loans,sbl.
Sunday, June 27, 2021 9:06:00 AM

December 27, 2012
It was that time again to renew my FAA medical, and if you are like me then you are new to the FAA's online process. The FAA have stream lined the process on a new web site at   medxpress.faa.gov . The Stuck Mic AvCast did a recent episode on the process on MedXpress. Having just finished I'll recap what I did. First if you are a 20-something like me the the online form at MedXpress is extremely easy to fill out to set up an account on the MedXpress site. The site only has one form to fill out. FAA Form 8500-8. This is the old form that you used to fill out at the doctors office. After filling it out online you can print it out and save it as a PDF file. I love saving things as a PDF I have a folder in the DropBox cloud service that I keep all of my important papers so I don't lose it. This online process is just for the FAA Form 8500-8 so if you have any special considerations those must still be filled out by hand. I recently got LASIK and didn't really know
2 comments
Read more