Start of the summer

May 22, 2008
Jessica had the last day of school today and now we had the whole summer to go or just the 2 months that it is. The camping trip is now canceled because well from what I hear there is going to be a 3 or 4 in. of snow on the ground so well it doesn't sound like fun camping. so the back up plan is to go see Indiana Jones and go out to eat it should be good I'm really excited well.
So in my life things are going well i went on my first flight cross county trip it was really fun. I had plans to fly up to Prescott then over to Payson and eat lunch there. But when i woke up that morning and looked at the weather it was too windy in Prescott so I had to make a change in plans but i had to fly at a airport that was above 4000 ft. so the only one that was close and had good weather was Willcox. We didn't stay in that whole long then we went up to Safford. The flight felt like my first flight all over again. there was so much going on inside the plane it was crazy. A lot of new things to learn. It was so much fun though at the end of the flight I almost forgot that I was doing this all for school and not just for fun. It was great!
I also over the week bought a MacBook. I've eyed the one Jessica had that the school gave her and really fell in love with everything, so i went and got one of my own here is a pic it taking a pic of it self. 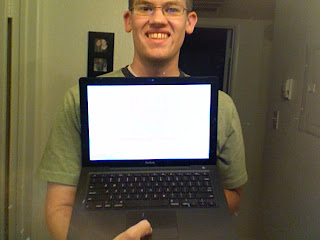 paula said…
We enjoyed the evening of movie and dinner, though I thought the movie was kinda silly. I wish you had told us about your flight. I knew you were doing that be forgot what day. I think my mind is going:)
Saturday, May 24, 2008 7:34:00 AM