It Came, It finally came!

November 01, 2008
Yes it came! you are asking your self what and then sneaking a peek at the pictures below. I got a new license plate. For some time I've been obsessed for some reason with license plates. I've even had to change my mother-in-law's plate. It all started with Jessica's car and the dealership license plates cover that was around it. I wanted to take it off but she wouldn't let. She said it looked funny with out a cover. So I was out to find a new cover that fit just right. She loves frogs and was looking to something that was frog that didn't say "I'm a tree huger" and I couldn't ever find one so I went for the next best thing. School. I found the NAU bookstore , Jessica's alma mater, online and she found one she liked. and here it is I think. I fit her car quite well. 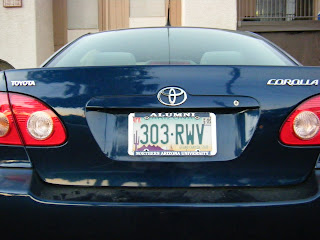 In the mean time I was thinking about my own car and I been feeling that I need to jazz it up a bit. I bought a sparky sticker for the window but that just wasn't enough then I felt inspired this one of my favorite web sites. 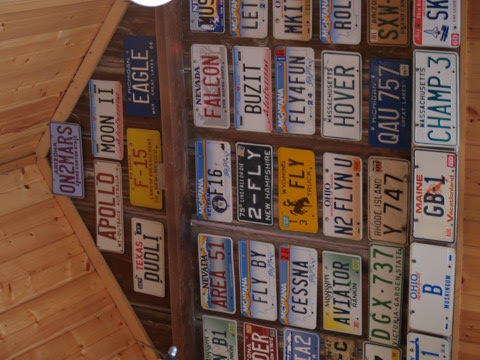 I thought it was cool so I thought I get a flight oriented custom ASU plate the next time my registration came around. Then Jessica said why don't you just do it now. I didn't even think you could but she was right. We spent some time trying to figure out what to put on it. I knew I wanted something to do about flying and on the ASU plates you can only have 5 letters. We tried lot of different things: FLY, FLGHT, IFLY, PILOT, etc. Which were all taken. Then found WEFLY, and FLYBY that were available we like that the 2nd. I put in the order and 14-20 business days later it's all on my car. I think I looks great. 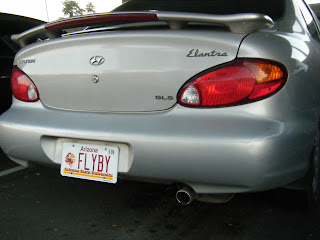 For a while I had noticed that there were holes to mount a plate on the front of my car. I settled on a scuba flag (red with a white strip) and there is a shark to make it look cool. 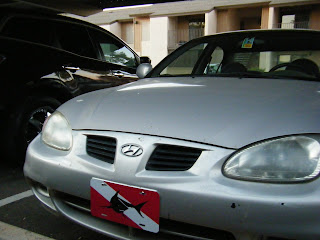 Jessica said…
I like how you took the pictures of our cars in such a way as to make your car's butt look smaller than my car's butt. That wasn't very nice. Just remember that when I have the camera someday...
Saturday, November 01, 2008 11:10:00 PM