February 17, 2009
I thought I would just give an update on what it going on in my life right now. So far I'm still flying I try to at least 3 times on week until the loan run out which should still be a while.
I have started school I'm taking Physics 2 not so fun but I do learn and I'll get through it. Aircraft engines. (where basically we take apart the engine of an airplane put it back to together and talk it) It's easy and fun. Air Transportation where we look at airline and see how they run and how Southwest doesn't have to declare bankruptcy and the other do. And Conversational Pima (Akimel O'Odham) with Jessica it's a fun class. School is a little stressfully but that is life. Here's a pic for my engines class we just put this back together. 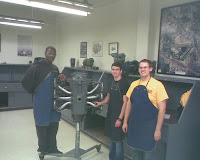 Brendon is doing great on him mission it seems like every week that he telling about a new person that he is teaching and has a baptismal date. I think it is great. I makes me think of my mission I can tell he is doing great.
Since Jessica got into her accident in January we've been using "Kevra's" car. Which we thank her for it. Last weekend we went out and got a new car a 2009 Toyota Corolla in red. It's nice nothing like having something brand it's nice. I'll get a pic of it soon.