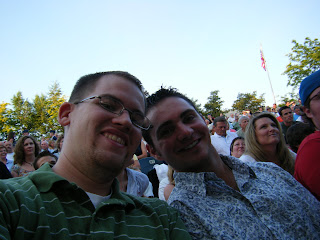 I'm in Utah with Jessica's family still and it's been really fun you can read all about what we've been doing on her, her mother's, and brother's blog. Last friday I called an old missionary friend up. We never were companion but we lived in the same apartment in Almere for 3 months. Well turns out he had one ticket to the Big Bad Voodoo Daddy concert in Layton. And it was already a sort of guy night out because John (the friend) wasn't going with his girlfriend. I asked Jessica if I could go and she let me. The drive up there is over an hour. I went early to talk to John. It was great catching up and talk to and in Dutch. Then off to the concert me, John and two of his friends. We had font row seat right in the middle of the stage. (John got them for free) The concert was amazing! They were so good. The solo's were great not to long or short and it seemed like they didn't miss a note. Very professional, very nice. The whole time I wanted to just get up and swing. After the concert was over we went back to John house and I spent the night because I didn't want to drive all the way home that late. So I did and was home early the next morning.

paula said…
That sounds like fun! Kevra would be jealous cuz she loves to swing. So does Jordon, for that matter. So how was the Dutch? I'm glad you got to see a friend from your mission.
Sunday, July 13, 2008 8:23:00 PM

Billy and Stephanie said…
wow hey it's been sooooo long since we've talked and i have no idea if you remember me at all... if i remember you were in my history class like freshman year at rhodes and you were the only other person i know that knew what frog eyed salad was.....well even if you don't remember me looks like things are great for you and your wife is beautiful! have a great day