October 03, 2008
Today before my class I took my friend Nick up and went flying. He is going to start he's flight training soon and this was also to give him a little extra push. Well it worked. We took off for CHD and I was headed for E81 in Superior, AZ there is a dirt strip there that I just wanted to touch down on and it got better. I was a little hesitant to go that way because it was a little hazy but we went on. I also didn't know if I wanted to touch down ether because the A/FD said there were large rocks on the field. We got closer and it just looked better and better then flew over at around 200ft and I didn't see any rocks so we circled around for a touch and go. (didn't have the money to stop) I floated a little long but made it down and up. I was so excited I forgot to tell Nick to record it. so the picture below it at the take-off you can see the field in the back ground. The most thrilling landing I've made since I started flying. 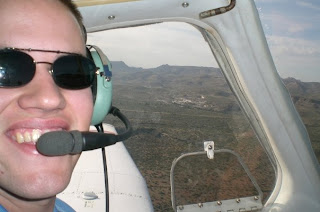 paula said…
Dirt runway? Sounds about right for Superior:) You are just flying everywhere, racking up those hours.
Saturday, October 04, 2008 7:50:00 AM